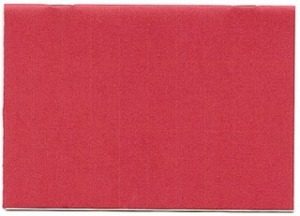 ‘Desertion’ was published as a chapbook in 2011 by Arthur Shilling Press (A6, 8 pages, 60 copies) with a plain red cover.

‘Desertion’ is an archive essay consisting only of words spoken on oath and taken from the British Army’s court martial records of the 1914-1918 war. A new indentation denotes a new voice, each one fully referenced in the end notes. The defendants in these cases were executed.

The first sentence of the poem is “I was at the Battle of Mons and Le Cateau and my nerves were shattered by the sights I saw.”

It is the first of a series of collages which focus on acts of refusal – the sequence is collected and published with other archive material in the quartet anthology VierSomes 000 edited by Stephen Mooney (Veer Books, 2012).